Cable Bay is named after the communication cable that connected New Zealand to the rest of the world for many years. More recently it has been farmed by generations of the Stuart family.

Cable Bay was originally named Schroeders Mistake. Then re-named Cable Bay when the Eastern Extension Telegraph Company laid the first Cable across the Tasman from La Perous near Sydney, arriving here on 21 Feb 1876.

A whole community developed around the Cable Station. In those early days there was no road in and people were often forced to wait on the tide before crossing the river and driving their horse and cart along the side of the estuary.

The press had an official reporter on site. And its said that the more whiskey he drank the better the writing.

There was two tennis courts, a billard room, a boarding house for cadets, blacksmith and a telegraph room where morse code messages were received.

The Cable Station burned down in 1914 and was shifted to Wellington in 1917 when it finally closed. The remaining buildings were shifted to Nelson.

In 1837, there were two methods of sending a message along a telegraph line. Wheatstone and Cook perfected a system, but Samuel Morse’s was preferred as it required only a single wire, whereas the former needed two wires, and two operators at each end of the line. Messages could be sent at about 35 words per minute using the morse code, and up to 45 words per minute using Wheatstone and Cook’s apparatus. 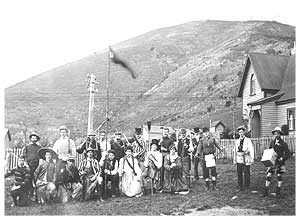 The clipper ship, the Weymouth, first attempted to lay the cable on 27 July, but the tidal rip was so severe that the cable broke. The second attempt in August 1865 proved successful, and communications between the Islands became possible on the 26th of that month. The Whites Bay station was initially staffed in a similiar manner to that which Wakapuaka station was to be, but in 1875 the terminal equipment was moved to Blenheim.

In 1875 a land line was extended from Nelson via Tophouse and the Buller Gorge to Westport. Thus, by 1876, there were links East and West from Nelson. 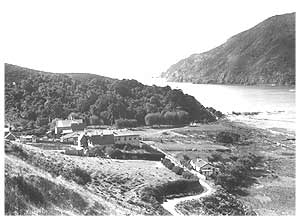 The Eastern Extension Telegraph Company began laying cable East of Suez in the 1860’s. In 1872, a land line connected Darwin and Adelaide, subsequently linking Sydney and the United Kingdom. The New Zealand Government say the obvious advantages in linking New Zealand into the world wide service, and with the Australian Government, backed the E.E.T.C. in the laying of the cable. Details of the laying can be found in “The Colonist” and “The Nelson Evening Mail” of February 1876.

Two ships, the Hibernia and the Edinburgh, were used to lay the cable. The Hibernia, the larger of the two at 3000 tons, had three tanks 30 feet in diameter and 26 feet in depth, each capable of holding approximately 450 miles of cable. The Edinburgh’s largest tank was 32 feet in diameter. Both ships were steamers. In comparison, the Great Eastern, which at that time was the largest cable laying ship in the world, had cable tanks 80 feet in diameter. The Hibernia laid cable from La Perouse to 60 miles from Cable Bay. This cable consisted of five miles of 14 tons/mile shore end, 12 miles of first intermediate cable of 4 tons/mile, another intermediate cable, then the deep sea cable of 35 cwt/mile.

The laying of the cable began at La Perouse on the 5 August and at 7.00 a.m. on the 7th August the first tank on the Hibernia was exhausted, and the second one spliced on. At 8.30 on the 9th August the main cable tank was spliced on. As an example of the rate of cable laying, in a 24-hour period, 131 miles were travelled, and 149 miles of cable were laid. At 5.00 p.m. on the 11th, the second intermediate cable was spliced on, and 24 hours later the cable was buoyed, 20 miles the other side of sandspit (60 miles from Cable Bay). The shore end of the cable was laid from the shore, and weighed 10 tons/mile. The shore end was carried in by ten boats, to make the job of pulling the cable ashore easier. 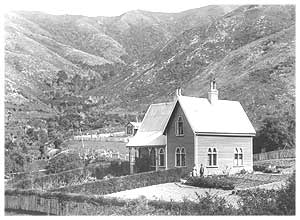 The shore end was some two inches in diameter and was buried four feet in the sand, so as to be kept damp. The cable had to be kept damp otherwise the gutter percha, a rubbery compound surrounding the inner conductors would become brittle and crack. This would expose the conductors, and upon becoming wet again could corrode the copper. The cable termination building had 4 thickness walls to keep any sand and dust out. It took 15 hours to lay the 60 miles of shore end, and the final splice was made at 2.00 p.m. on the 18th.

For three days during the laying the cable was lowered to a depth of 2600 fathoms, and this caused great concern, as any recovery from this depth would be rather tricky. Recovery from any depth up to about 1500 fathoms was relatively straight forward.

On the 19th August the two steamers returned and, landed their measuring and testing instruments. The Evening Mail had this to say about the Hibernia, “It had a long row of wheels with brakes and other apparatus for adjusting the speed at which the cable is paid out intervenes between the tanks and the wheel at the stern over which it finally passes.”

The first cable news was in the “Evening Mail” on February 22. On the New Zealand side, the position of the end of the cable was decided only a fortnight before the actual cable came ashore, and thus the job of putting up the telegraph line from Nelson to Cable Bay, 15 miles, was rather hurried. The line was put in at a rate of a mile a day, a fast rate in those times of limited mechanisation. 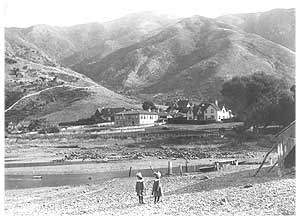 The cable was bought ashore in the South Island because at that time, the South Island’s business was considerably larger than that in the North. Up to 1900, Dunedin was the largest city in New Zealand. The cable proved very useful, but expensive at 1/8d per word to Australia, and 15/- per word to the United Kingdom. Two staffs manned the Wakapuaka station, an Eastern Extension group of cable operators, and a New Zealand staff of land line telegraphists. In all, it took 25 men to work the station. In addition, a representative of the Press Association was there in order to fill out the skeleton Press messages received before their transmission throughout New Zealand. Nelson was linked to the West Coast and to Blenheim by overland wire. Blenheim was in the main trunk of the communication network between Auckland and Dunedin.

On 11 February 1880 another Cook Strait cable was laid from Wanganui to Wakapuaka. The cable was laid by the cable steamer “Kangaroo” to the north of the Australian cable in the Bay. Eight boats carried the shore end ashore, which was five miles of 14 tons/mile cable. The southern shore end was laid first, and then the Kangaroo proceeded to Wanganui to lay the shore end there. The deep sea portion, 31/2 tons/mile was then laid from Wanganui to Wakapuaka, and the final splice made on 12 February at noon. Several officers from the ill-fated Hibernia were on board the Kangaroo. The Hibernia had been lost off the South American coast. 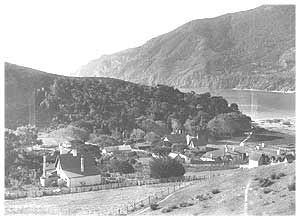 A second Trans Tasman cable was laid in 1890 to supplement the existing cable. The cable steamer “Scotia” landed the shore end at noon on 26 April 1890 at La Perouse, near Sydney. The Scotia displaced 3000 tons and had 1365 nautical miles of cable on board in 3 tanks. The cost of the cable was Â£200,000. The captain of the Scotia was Captain Cato, the captain of the Hibernia when she laid the first cable. The deep sea portion had been completed on 5 March, and was buoyed 150 miles out from Wakapuaka. The cable was of five different types, and was laid along a different route to the first one. At it’s deepest point it was 2800 fathoms down, and this made it the deepest of all marine cables at that time.

Later, the business in the South Island dwindled, and the North became more important. This was due to the gold rush diminishing in the South and the end of the Maori Wars in the North. At the beginning of the First World War, the main operating building at Cable Bay was burnt down, and this hastened the removal of the cable termination to the North Island.

In 1917 80 miles of new cable was laid to Titahi Bay, and 16 miles of underground cable brought it into Wellington. Direct communication between Wellington and Sydney was made on 23 May, and the Cable Bay station closed down. 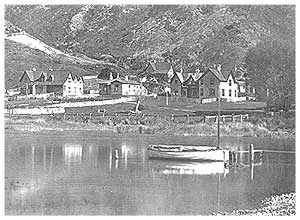 Cable Bay Holiday Park is the perfect campground for your family holidays. Enjoy amazing activities like walks and kayaking or have a relaxing day at the main beach.